His latest release "Steve Elson At Play", Steve's fourth CD was released in 2016. 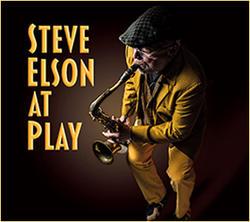 The new CD release, Steve Elson At Play captures the exhilaration, sharp intelligence and immediacy of the soul music scene that was his training ground in and around Oakland California, and weaves it with a working musician’s wit and subtlety perfected in the international and NYC music scenes.

The combination is electric and rich, an uncommon collection of tunes that rock and soothe and make you want to dance all at once.

Well known for his long-time association with David Bowie, (Elson’s iconic baritone sax solos on Modern Love and Let’s Dance are rights of passage) this saxophonist has been making distinctly beautiful music that swings for decades.

Pitchfork magazine (on Bowie’s release “The Next Day”): “Bowie's best work; it's no coincidence that two of the album's best moments, on the skulking "Dirty Boys" and the taut "Boss of Me", feature glorious sax solos from longtime collaborator Steve Elson.”

This knowledge uniquely positions Elson to take risks with the music while being confidently grounded in the groove.

Steve Elson at Play, his most recent output, has bite, snarl and authenticity. Elson departs from his earlier releases with a more in-your-face, funkier direction.

Elson enlisted the best of the best R & B players in New York. The Borneo Horns, (Lenny Pickett, Stan Harrison and Elson) a sax trio that came together on David Bowie’s Serious Moonlight tour, are featured on three tunes.

Wade Schuman, leader of the internationally acclaimed Hazmat Modine, (in which Elson is a featured member), plays some great harmonica on Four Quarters.

Elson played saxophone in “soul bands” in clubs in and around Oakland, California. “We’d play lots of James Brown, Billy Preston, Temptations, Sam and Dave, Tower of Power, Wilson Pickett…whoever was popular at the time. At the Lucky Thirteen we’d start at 9:00 pm and ended at 6:00 am. Nine 45 minute sets for dancing - only interrupted by the occasional dance floor-clearing brawl. You needed stamina - playing for dancing meant sticking with what was important: finding the pocket and staying there.”

This music finds those pockets in new ways. And it knows how to stay there - with authority and conviction – and it grooves.