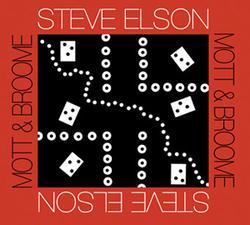 Think of this cd as an excavation.
The dig is in musician/composer Steve Elson’s neighborhood: starting on the sidewalk, say, off the Bowery in New York City’s Lower East Side.
The first job is to break through the hard contemporary surface, and, if you look around, people are doing that all over. There’s the constant rumble of affordable housing being torn down, bodegas giving way to condos, high rises shadowing tenements.
But this music is interested in honoring, not erasing, the past. In the first layer of top soil are some artifacts from when Steve first moved here from the Oakland area. Maybe one of his kufi caps, a horn chart from his time with Johnny Otis or David Bowie, that scrap of the New York Times that called Steve’s early compositions “the missing link between the Phillip Glass Ensemble and James Brown’s JBs.”
Dig deeper, and you can trace his ancestry: Steve’s parents raised him in California, but his grandfather grew up a few blocks away in the back of a storefront ladies tailor shop. And his great-grandfather immigrated to the Lower East Side from Russia --where, to complete the circle, Steve’s son was born. Those connections might help explain some of the resonance to be heard on “Mott and Broome:” the sense of place and of history, the easy and remarkable shifting through different eras.
But what this excavation also reveals are the other cultures that have made this city: a sensual mix of Latin rhythms and Duke Ellington horns, the cry of Arabic flutes coupling with the soft swing of the bossa nova. This is the substrata, the loam, that these compositions travel through and grow from.
Whether the old world “Sevilla” or the new world “Mott and Broome,” many of these songs sound vaguely familiar, as if someone was gently lifting up and examining pieces of the past. But they’re also discoveries: brand new, surprising. And throughout is a kind of pervasive questioning. What have we done? What are we doing?
Picture this cd as an exploration of time, an excavation: the treasure that Steve Elson and friends have found in the dark – and brought to light.
~ Daniel Wolff